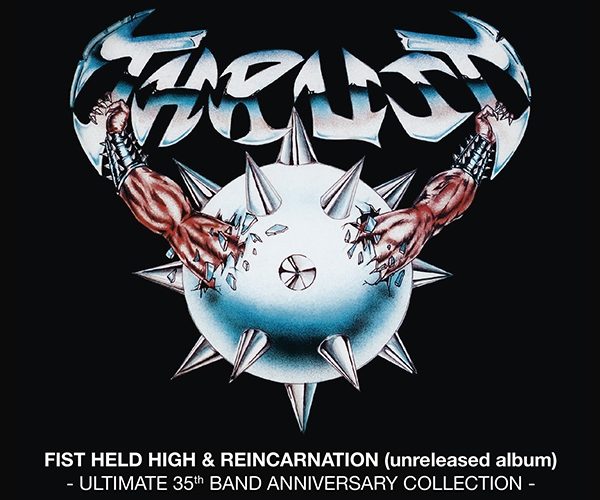 –THRUST-! Founded in late 1980 in Chicago ,ILL. Thrust started the metal scene in Chicago opening for such acts as Motorhead, Michael Schenker, Twisted Sister. Gathering a quick and large following THRUST began headlining and soon was signed to ERECT RECORDS releasing the classic “LIVE EP- ”ROCK FOR POLAND” in front of 10,000 metal maniacs. Thrust than was signed to METAL BLADE RECORDS and recorded “DESTRUCTER” on the classic “METAL MASSACRE 4” album and soon was opening for JUDAS PRIEST on the Screaming for Vengeance tour. Touring for a while THRUST released the famous classic legendary debut album with Metal Blade Records called “FIST HELD HIGH” which became a cult classic.

Now in 2015 THRUST releases FIST HELD HIGH/REINCARNATION “The 35TH Anniversary Collection” with 31 songs including the hits and never before released “demo” songs which were recently discovered!

Also included is the UNRELEASED album ‘REINCARNATION“!! Engineered by Pat Regan and produced by Grammy Award Winning Producer Bob Kulick! THRUST has come full circle and is ready to conquer the world! See you on tour!!!!

“A BIG Thank You to the fans who never stopped playing the music. After all these years it’s always been about the music, standing the test of time, connecting with the fans soul, pouring out the creative spirit thru the music into the hearts of many and return filling our hearts. For that is the true connection between the heart soul and each other. That is why the music will always live on.” – Ron Cooke 2015

In celebration of THRUST‘s 35th anniversary Metal Blade Records is releasing the ultimate edition of the band’s classical 1984 album “Fist Held High“. Including the entire album, live and demo tracks from the beginning until the late 80ies plus the so far UNRELEASED studio album “REINCARNATION” produced and Engineered by Pat Regan and Bob Kulick!