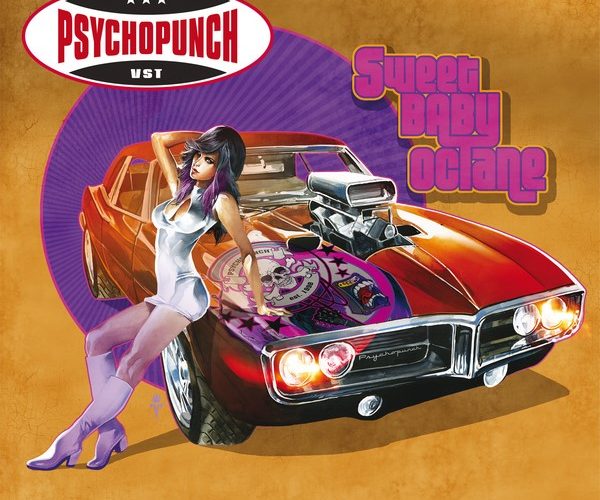 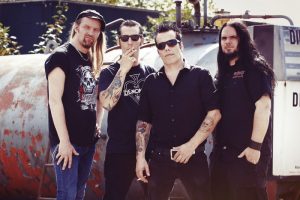 Only two years ago, JM and his drummer Jocke faced the challenge of creating new personnel structures as Psychopunch were in urgent need of a new line-up following the release of their previous album, Smakk Valley (2013). The nerve-wracking life on the road, the many concessions that an established band sees itself forced to make – all those elements had worn out the group’s previous line-up. They went on to enlist Patrik ´Walle` Wallert (formerly Dead City Rockers) as their new bassist and Magnus Henriksson (ex-Eclipse and W.E.T.) on guitars. “Walle and Magnus’s down-to-earthiness fits in perfectly,” beams JM. “Both are not only excellent musicians but also have the same sense of humour as Jocke and I. In addition, Magnus has brought a new and very positive aspect to the band with his guitar solos, which are pretty unusual for our kind of music.”

The new line-up has also led to a new way of working. While Smakk Valley primarily rested on the shoulders of only two of the band members, Sweet Baby Octane was composed by a collective. JM: “The first fragments of a song were mostly based on my inspiration, the rest was developed by the whole band, which made work so much easier for me as my suggestions fell on fertile ground with the other three. They all contributed their own ideas, which definitely benefits the new album.”

JM is talking about typical highlights such as ´I´ve Been Around`, ´What Did I Say` and ´On A Night Like This (Hell Yeah)`, which the Psychopunch frontman rightly refers to as a “perfect party punk rock’n’roll song”, featuring guest vocalist Tossa from Swedish punk rock act Puffball. In addition, Sweet Baby Octane holds lots of surprises in store, such as the grooving ´Turn Up The Radio` and the atmospheric ´Drinking Alone`, the first track in the history of Psychopunch to feature an acoustic guitar (incidentally, also played by drummer Jocke). ´Forever And A Day`, a duet with German vocalist Clare Von Stitch, also deserves a mention. JM: “Everybody expects you to pick a ballad for a duet with a female vocalist. We went exactly the opposite direction and decided on a full-blown punk number.” Clare Von Stitch was brought to Psychopunch’s attention by Dirk ´The Pixeleye` Behlau, who produced the video clip to support the song and shot the photos for the new cover artwork. ´Punkrocker`, a cover of a track by the Swedish band Teddybears, is another unusual choice which really lives up to its title in Psychopunch’s version. Another innovation in the career of the Scandinavian punk rockers: ´When You´re Out Of Town` is the first genuine country punk track, featuring Swedish singer Julia Mörtstrand as another guest vocalist. Talking of vocals: none of the previous Psychopunch releases featured this many strong and gritty chorus parts.

The 13 tracks (plus intro and outro) were produced by Pelle Saether at the Studio Underground in Psychopunch’s hometown of Västerås between April and Juni 2015. “We’ve never had so much time for a production,” JM remembers happily, “that’s why we were able – for example on ‘Time Is On Our Side’ – to hone arrangements and some finer points in the studio.” The effort has definitely been worthwhile, as Sweet Baby Octane proves. Psychopunch fans will be delighted by the many positive surprises their heroes have come up with. And by the way: the new album will be available on CD as well as on vinyl (including bonus track). So what are you waiting for?