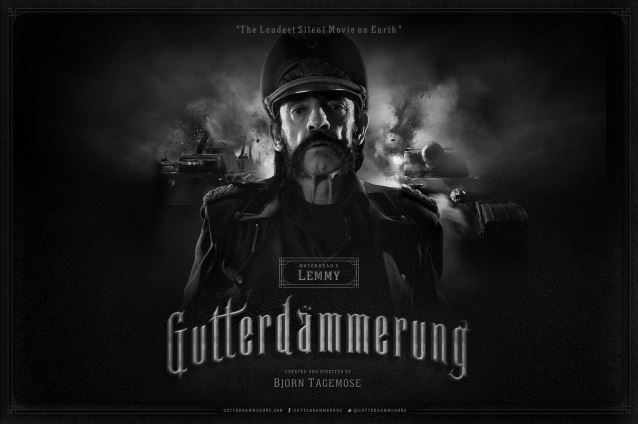 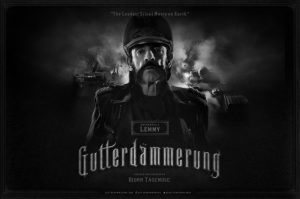 Hot on the heels of the announcement of Grace Jones, Iggy Pop, Henry Rollins and Jesse Hughes comes the next round of stars for the forthcoming epic loud and dark fairytale“Gutterdämmerung”.

First up to face the hounds of hell is Ian Fraser Kilmister, better known as the legendaryMOTÖRHEAD frontman Lemmy, whose comment about the film is: “If you don’t like it…fuck off!”

Joining Lemmy will be the leader of the most beautifully brutal and punishingly precise band on the planet, SLAYER‘s Tom Araya.

Lemmy will play a crazed general leading the “Armour Cavalry” during a dark explosive moment for the two heroines of “Gutterdämmerung”.

As a mysterious messenger of darkness, Tom Araya will be “bringing the light” by setting the silver screen on fire with a truly primal performance.

Even more stars are to be announced in the coming weeks leading up to the big reveal of“Gutterdämmerung”‘s earth-shaking cinema trailer.

Much in the tradition of classic movies of 1920s Hollywood, the film is mostly silent but instead of a lone piano a live rock band of rock express the emotions and action whilst special effects from the film explode to life all around the audience. Think of a deafening rock ‘n’ roll version of Secret Cinema taking place in hell and you might just begin to have an idea of what“Gutterdämmerung” is.

Tagemose has assembled the greatest cast in the history of rock movies; Grace Jones, Iggy Pop, Henry Rollins (who co-wrote “Gutterdämmerung”‘s script) and EAGLES OF DEATH METAL‘s Jesse Hughes are just the first names to be announced with more truly legendary rock ‘n’ roll names to be revealed in the coming weeks.

This spectacular film will tour with its live band and a live narrator at the end of 2015/early 2016.

The visual artists whom have worked on “Gutterdämmerung” boast clients from Vogue toLouis Vuitton to Vanity Fair, giving the film a look and feel of the classic arts, beauty and high-end fashion.

The film is set in a world where God has saved the world from sin by taking from mankind the Devil’s “Grail of Sin”… the Evil Guitar. The Earth has now turned into a puritan world where there is no room for sex, drugs or rock ‘n’ roll.

From up on high in heaven a “punk-angel,” Vicious (portrayed by Iggy Pop), looks upon the world with weary bored eyes. Behind God’s back, Vicious sends the Devil’s guitar back to earth and sin in all its forms returns to mankind.

An evil puritan priest (Henry Rollins) manipulates a naive girl to retrieve the guitar and destroy it. On her quest to find the Devil’s Grail Of Sin, the girl is forced to face the world’s most evil rock and roll bastards. Throughout her journey, she has a rival in the form of a rock chick determined to stop her from destroying the instrument.

Björn Tagemose is a Belgian-Swedish director and visual artist. He is mainly active in the arts and the rock and fashion industry. He is also the founder of the artist collective “shoottheartist.”

Björn Tagemose‘s artwork is part of the permanent collection of the famous Groeninghe Museum in Bruges and has been on show in the Paris Louvre, FOMU Antwerp and Stockholm Kulturhuset. Shamelessly playing loud rock music even when working for posh fashionistas,Björn Tagemose has throughout Europe earned the nickname “the rock and roll director.”