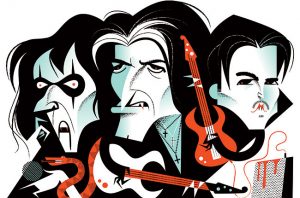 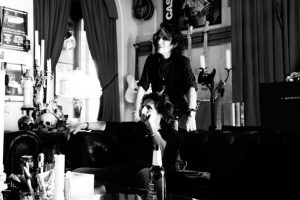 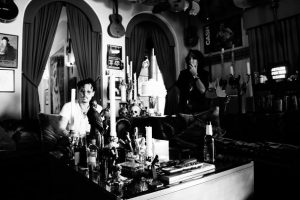 Who coined the nickname Hollywood Vampires?

Alice Cooper: The Hollywood Vampires was a drinking club at the Rainbow [Bar & Grill] in Los Angeles, and it was the guys we are honoring: Harry Nilsson, John Lennon, Keith Moon, plus me, Mickey Dolenz from The Monkees and Bernie Taupin. We were vampires because we never saw daylight — we drank all night. Jimi Hendrix and Jim Morrison, the guys we learned from, were guys we drank with. I had never done a covers album, and I said, “Why don’t we pay tribute to our dead, drunk friends?” They would have gotten the joke — trust me.

The name that doesn’t seem to fit in that list is Mickey Dolenz.

Cooper: Mickey was there every night. Think of the bands that had real drug problems: The Mamas & The Papas, Jackson Browne, Fleetwood Mac. All the commercial bands. The Monkees had some pretty serious problems — as did The Partridge Family! The bands with the heavy images were not necessarily the heavy users. I didn’t see heroin until I was in New York, living at the Chelsea Hotel. You had the Lou Reed gang there, so you would see people with their keys in the door, sitting outside, because they couldn’t turn the key. (Laughs.)

Joe Perry: I was a drug snob. I loved heroin so much that if I mixed it with anything else, it would wreck the high. So when I was strung out on heroin, I didn’t do anything else.

What was your closest brush with death?

Perry: Around 1975, Aerosmith was in a Learjet at 14,000 feet and the air pressure valve blew out. The pilot did the panic drop — lowered the landing gear, put up the flaps and put the jet almost upside down. All the lights went out. They have to get down to 3,000 feet so you can get some air. Steven [Tyler] and I were hugging each other — that’s how close it was. From then on, he used to carry a cassette recorder and keep it on “record” for every takeoff, because he wanted to record his last words.

Cooper: I almost drank myself to death. I woke up one morning and threw up blood. Throwing up blood onstage is cool. But throwing up blood in front of your Holiday Inn maid is not cool.

Perry: I remember seeing pictures of you on the golf course, with a golf cart. You were riding in front, and you had another golf cart full of Budweiser. That was my classic image of you. I probably laughed for 20 minutes at that picture.

Cooper: Yeah. When I quit drinking Budweiser, their stock plummeted. Our band proved you could live on nothing but beer for three years — then it catches up with you. Joe and I got to the crossroads and realized: You can either die, or you can make 20 more records.