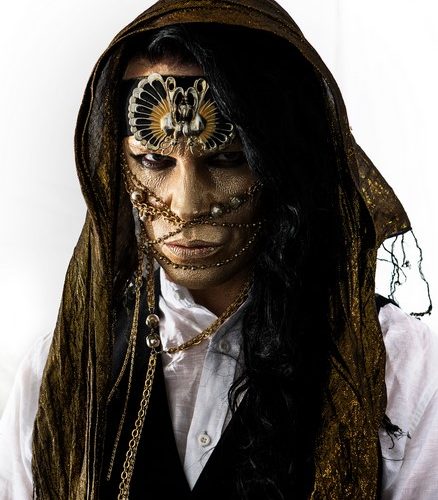 The third full-length album from Casablanca, is a concept album based on the Chuthulu mythology, with a twist. Before man The Old Ones ruled the world stated H.P. Lovecraft!  But before The Old Ones, The Original human being of the Golden Void (the Original) ruled the earth Casablanca now claims!
The Originals were creatures way beyond superstition and religion. Knowledge, enlightenment, style and rock ‘n’ roll was the real thing! But then came The Old Ones… Shackled and tossed away into another dimension by The Old Ones who soon would share their destiny. Ever since then The Old Ones have an urge to return and destroy the modern man and rule the world once again. However, The Originals also have an unwavering desire to somehow return and prepare humanity in time before The Old Ones return to throw the world into absolute darkness once again.
This is a story that instead of total cosmic terror, choose to highlight the passionate life stories standing strong in an almost hopeless situation. This is a story of those who despite the impending collapse of the civilization; do not give up the fight, or their dreams of ​​sex, love, rock and fast cars.
Miskatonic Graffiti comes in three sections. In the first section (Enter the Mountains) The Phantom returns to our four dimensional space, approximately 200 years ago. The touchdown takes place in a location later to be called The Mountains, a place where gates to other worlds may appear.
Here’s where the majority of the stories on the album take place, and it’s where The Phantom established The Miskatonic University to arm man with knowledge and wisdom before the dark times, that slowly but surely will come!
The Phantom is the sole returner of The Originals and got its name by the students who considered it “the phantom of the university”. The modern contemporary human being who The Phantom meets along generations of preparation leaves deep impressions and new thoughts in its former imprisoned soul. Rather than just taking the roll as a teacher and commander, The Phantom in its mind transforms itself into the world’s greatest rock star. Raised, reborn, released and furious with eons of hunger and revenge in his arsenal to prove it! Its golden color is due to the atmospheric composition when it once walked the earth. Many would consider it a curse; to him it is a blessing. All hail the golden god!
In the second section we get inside the unbearable simplicity and mortality within the band around The Phantom, their dreams and everyday life in The Mountains. We meet the crabby couple Mat and Josie. He’s the quarterback in university’s football team; she’s the knockout queen of the cheerleaders. Born and raised in The Mountains, misplaced and destined for better.
Sergeant of Doom, or rather sergeant at arms, is the right hand of The Phantom. He’s a university dropout, a street car racer and a catcher in the rye with an unknown Background.
We also encounter The Death Organ who holds guest lectures in the astrophysics of the body and Sister Sundown who only can be seen after dark. Two who walks in shadows is found in Eric the Viking and Mr. Roxiewicz who despite heavy missions elsewhere still march in The Armies of the Night.
In the third and last section (Exit the Mountains) we sense the euphoric feeling of victory, the feeling of resignation and the feeling of someone trapped in a corner attacking with nothing to lose.
Exit the Mountains is the revolution of the restless, where boredom becomes the perfect human weapon against creatures running on a different poison. Make it or break it, as long as it leads to something else, something better than here and now. If we go down, we go down fighting!
The Phantom knows what needs to be done, time is the answer but time is short…