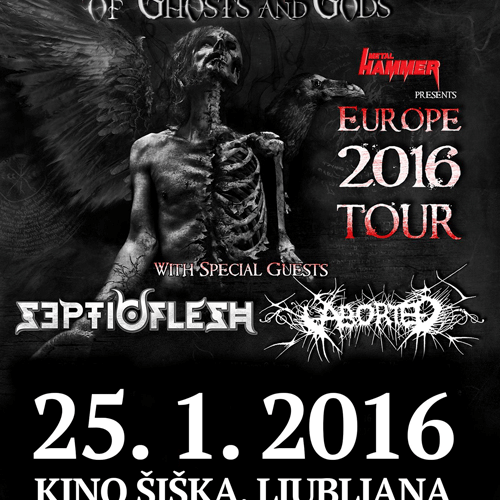 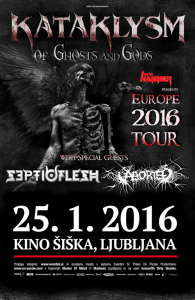 Born in 1992 from the cold winds of Montreal, Québec, Canada comes one of the country’s top extreme musical exports to date: KATAKLYSM.
Relentlessness and a hard work ethic have made KATAKLYSM a household name in the extreme metal genre in addition to their overwhelmingly positive reputation of fan-friendliness. With a career spanning over 20 years, KATAKLYSM is a leading force in the most brutal & powerful genre in heavy metal and has conquered territories such as Europe, North & South America, Australia, and Asia while recently becoming the first Canadian metal band to ever play South Africa.
KATAKLYSM’s 2013 studio album, Waiting For The End To Come, experienced worldwide success in terms of album sales and touring. Around the globe, the band played to full houses and paved new in-roads into Brazil, Japan, and South Africa where they played to their native fan bases for the very first time. That same year, KATAKLYSM won the “Metal Band of the Year” Award at the renowned Indie Awards ceremony in Ontario, Canada and soon after, was nominated in the “Best Metal/Hard Album of the Year” category at the prestigious Juno Awards (Canada’s equivalent to an American Grammy).
Fueled by the loyalty of their legions of fans who have made so many of the band’s accomplishments possible in their nearly twenty-five years of existence, the members of KATAKLYSM become even more inspired, determined, and unapologetic in their rise to the top of their genre by any means necessary. It’s now 2015 and KATAKLYSM are at it again – like a train that can’t stop its raging momentum.
With the completion of their twelfth studio album, Of Ghosts And Gods, KATAKLYSM is prepared to unleash a tsunami of the best possible hurt among the masses. Of Ghosts And Gods was recorded in three different studios from Montreal, Quebec to Dallas, Texas and Sanford, Florida in order to harness the expertise of the metal industry greats who best understood the band’s talents and their vision. Album tracking was entrusted to longtime producer/ KATAKLYSM guitarist J-F Dagenais (Despised Icon, Misery Index, Malevolent Creation); KATAKLYSM frontman Maurizio Iacono recorded his vocals with producer Mark Lewis (Cannibal Corpse, Devildriver, White Chapel) at Audiohammer Studios; album mixing was masterfully handled by legendary producer Andy Sneap (Megadeth, Amon Amarth, Testament).
The result is Of Ghosts And Gods – a melodic affair of top notch brutality graced with intelligent songwriting. As expected, KATAKLYSM’s famous body-slamming riffs and grooves never falter. Upcoming artist Surtsey (Occvlta Designs) designed sinister album artwork depicting the reality of humanity’s beautifully disturbing existence and its impending death. Endorsed by producer Mark Lewis as “KATAKLYSM‘s best album to date,” Of Ghosts And Gods demonstrates how – just like fine wine and an expert demolition crew – KATAKLYSM just keeps getting better with age. Titans are the most ancient of all the gods depicted in Greek mythology – even older than the Olympic deities. They represent the forces of nature. No other title could have been more apt to represent SEPTICFLESH’s ninth full-length. “Titan” is the power of darkness made manifest in music. Guitarist Christos Antoniou, who passed his academic studies of classical composition with honours and distinction, already proved his prowess for orchestration with “The Great Mass” (2011). Now “Titan” shows a level of maturity in his use of classical instruments in a metal context with no equal. The way to this glory was paved by the Greek’s celebrated comeback album “Communion” (2008), which came as a refined version of SEPTICFLESH’s long established sound: massive deadly guitars on the edge of blackness with intricate string-work supplemented by haunting gothic melodies and epic orchestral arrangements. The Greeks had used their hiatus after splitting up in 2003 well. Starting out as SEPTIC FLESH in 1990, they released the “Temple of the Lost Race” EP only one year later. With every following album from their debut “Mystic Places of Dawn” (1994) to the stunning “Sumerian Daemons” (2003) the band evolved in huge steps transforming and honing their songwriting skills and sound into highly original and very cinematic dark musical matter that has been described as black, death and gothic metal. Most of their previous albums have meanwhile been reissued with bonus material and made available again by Seasons of Mist. Yet now SEPTICFLESH have reached a new peek in their career. This “Titan” stands high and proud as a new force of nature to be reckoned with! There are many ways to die but even more to kill as sonic mass murderers ABORTED elaborately explain since their forming back in 1995 and once again explicitly underline on their newest, eighth studio album “The Necrotic Manifesto”. Founding member and vocalist Sven “Svencho” de Caluwé reveals that conceptually “the album is our own take on the sordid tales of the Necronomicon, the “book of the dead”, of corpse drowned in a sauce of gore and fun covered with a good old 80’s slasher vibe.” This idea was congenially transformed into excellent artwork by Par Olofsson, who already created stunning visuals for acts like The Faceless, Exodus, Immolation, Pathology, Immortal and more.
Delicious gory fun aside, musically ABORTED mean dead serious death metal business since day one, delivering their aural blows with a maximum of versatility and hard-hitting brutality successfully melting the technical US school of Suffocation, Cannibal Corpse with the melodic incisions of European flavor obviously inspired by recently returned UK gods Carcass or even Entombed. ABORTED hack, slash, cut, grind, blast, groove, crush, rip, tear, destroy, kill in every way humanely possible and this multi-faceted approach has earned them a dedicated fanbase over the past years.
“The Necrotic Manifesto” – also produced by Jacob Hansen (who already worked with the band e.g. on 2003’s “Goremageddon” and 2011’s “Global Flatline”) – makes no exception and continues in the tradition of its much acclaimed predecessor guaranteeing you maximum gore metal pleasure. Intensity – check, brutality – check, technicality – check, inhuman savage vocals – check, keyboards – nope, bittersweet melodies – hell no, folk elements – get outta here?!?! While remaining true to themselves.
ABORTED still have a couple of macabre surprises in store spicing their renowned and respected killing spree with some bonus-carnage: First up, are guest vocalists Vincent Benett (The Acacia Strain) on “Your Entitlement Means Nothing” and Phlegeton (Wormed) on “Excremental Veracity”, sweet as rot cover versions of the incredible “Funeral Inception” (Suffocation) and “Arise” (Sepultura) as well as an entire card came (!) invented and designed by the band accompanying the album’s limited edition as Svencho details: “The card game starts off with my humble self finding the “Necrotic Manifesto” at a truck stop while taking a dump on tour, reading out passages and unleashing hell on earth. Through the card game players take on the role of a band member or crew member and have to defeat the legions of hell with their maniacal leader: the doctor! All presented with a good dose of dark humor, horror and tons of internal jokes which will get players to know the members of the band a bit better and more personal.”
Ready to shed blood and spread gallons of guts across the globe, the live Armageddon known as ABORTED will first tour the US with Kataklysm in April, followed by European release shows in May before selected mass executions during the upcoming festival season. So, better believe the self appointed “Gurgloroth” Sven de Caluwé when he says “get ready mankind, ABORTED is coming right at ya!”