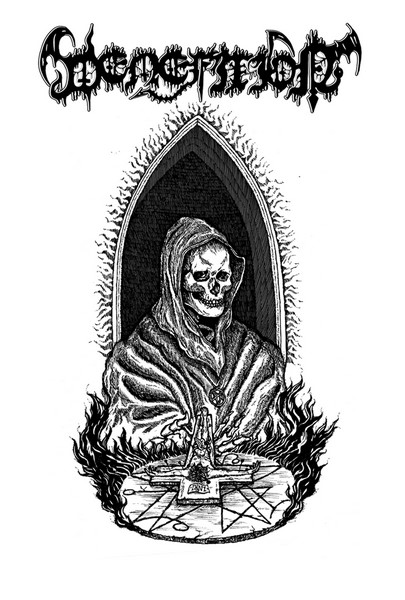 IRON BONEHEAD PRODUCTIONS is proud to present the debut demo of one of most electric bands the label’s come across in recent times: VENEFIXION’s Defixio. Heaving and hulking, monstrous and miasmic, VENEFIXION’s Defixio comprises four tracks of utterly barbaric ‘n’ blackened Metal of Death. Excavated in 2013, VENEFIXION infested the brains of K. Desecrator while in Australia and F. Goathroat in Germany. The project became reality in 2015 when both members moved to Brittany, France. Adding W. Cadaver on lead guitar, the trio’s central aim is to conjure forth a pestilent fury, like a venomous force bearing down straight into the skull, intent on tormenting those who listen to their musical malevolence. Merging forces in their homeland, the members agreed to extract elements from bands like Grotesque, Repugnant, Autopsy, Repulsion, Morbid Angel, and Massacre, all topped off with frenetic, Vomitor-ian solos. Fascinated by the dark side of life in its many aspects, VENEFIXION explores different cultures where death, curse, and evil are omnipresent. The result is a demo tape that’s timeless in its twisted, taunting thrust, “traditional” in one sense but easily evading “retro” redundancy in another, exhibiting that elusive X-factor which bristles with excitement the first few seconds you hear it: Defixio is its name, and VENEFIXION its masters.