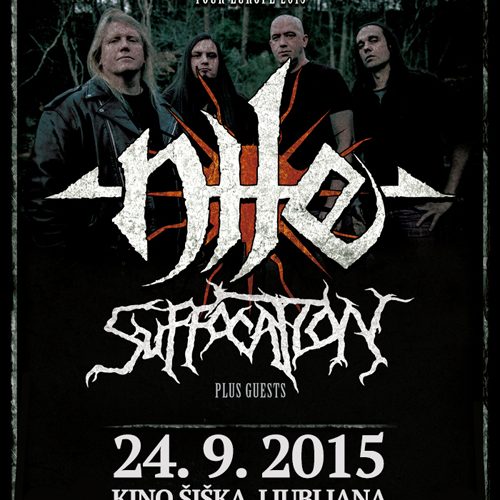 Few bands can be credited with creating a legacy, however, legendary New York based extreme metal outfit SUFFOCATION have done just that. For 20 years now SUFFOCATION have been creating music that has become the very standard by which we judge all things extreme.
Their fusion of technicality, groove and sheer unrelenting brutality has been imitated but never quite duplicated. Milestone records such as Effigy of the Forgotten, Pierced from Within, and Despise the Sun have influenced a wealth of today’s best musical talents. With the release of SUFFOCATION’s Nuclear Blast debut Blood Oath, their legacy of unrelenting and unique heaviness continues for perhaps the genres greatest band!
Formed in 1989, SUFFOCATION released their three-song demo, Re-incremation. Within weeks of its release came the interest of many record labels that wanted to claim stake to the first SUFFOCATION full-length album.
The band chose to release their follow-up, an EP entitled Human Waste, through Relapse Records in 1991. Human Waste saw SUFFOCATION bash out the beginnings of extreme metal’s most visible style, the New York combination of blasting grind-cord beats and metallic textures. But this was only the beginning.
In 1991, the now classic Effigy of the Forgotten (inducted into Decibel Magazine’s “Hall of Fame”) was released by Roadrunner Records. Effigy of the Forgotten brought SUFFOCATION and death metal to a new echelon, taking the multiple languages of music and unifying them in an evocative, thundering chorus of extreme metal.
In 1993, the band released their second full-length album, Breeding the Spawn, on Roadrunner Records. Breeding the Spawn surpassed expectations. This highly rhythmic album built on the legacy of their previous releases.
Following the release of 1995’s Pierced From Within on Roadrunner Records, SUFFOCATION embarked on massive tours of Europe, Canada, Mexico and the United States, playing to tens of thousands of fans.
In 1998, they released the EP Despise the Sun on Vulture Records and disbanded soon after. Extreme metal fans wept at the loss of one the genres greatest champions and pioneers. Eventually the EP was re-released in September 2000 and properly distributed by Relapse Records.
In 2003, SUFFOCATION reformed after a much needed break and in April 2004, Relapse Records released Souls to Deny. The group’s return was a truly devastating display of technical extreme metal. Over 400 shows and countless United States and European tours later (including the Wacken Festival in Germany, playing to over 33,000 fans), SUFFOCATION entered the studio to record the most mature and destructive album of their now legendary career. Suffocation, their 2006 self-titled release, again proved why they have solidly held their position as one of the most important and influential bands in the genre.
In 2008, the band signed a worldwide deal with Nuclear Blast Records and began working on material for their label debut. By 2009, SUFFOCATION had entered Full Force Studios once again with Joe Cincotta (Internal Bleeding, Criminal Element), who the band had worked with to record their two previous efforts. Zack Ohren (All Shall Perish, Decrepit Birth) was enlisted this time around for his mixing and mastering capabilities to capture the band’s ever-elusive live sound and intensity. The collaboration between all the parties involved has resulted in what is without a doubt their finest production to date! Add in the artwork and sick visualization of the Blood Oath concept by cult artist Jon Zig (Gorgasm, Deeds of Flesh) and you have the bands most complete all-around release yet.
In 2012 SUFFOCATION will chosen to be inducted into the Long Island Hall of Fame. They will be celebrated alongside such Long Island Music Legends like Billy Joel, Joan Jett, Twisted Sister and more. This is a huge accomplishment for SUFFOCATION as well as the genre they helped formed.
SUFFOCATION are currently in the finishing stages of their upcoming new album entitled Pinnacle of Bedlam. The record was produced by the band and tracked at Full Force Studios in New York by longtime collaborator Joe Cincotta. The mixing and mastering of the album is set to be handled this time around by world renowned producer/engineer Zeuss (HATEBREED, ARSIS, SUICIDE SILENCE). Pinnacle of Bedlam will feature 10 genre-defining-bone-crushing tracks and also marks the return of drummer Dave Culross, who played with the band previously on their Despise The Sun EP.